Totoriyak sman is a star sytem.

Totoriyak sman is one of the many procedurally-generated star systems in the No Man's Sky universe.

It has at least two planets located in brown gas clouds. It was originally shown during the PS4 Explore trailer in July 2016. 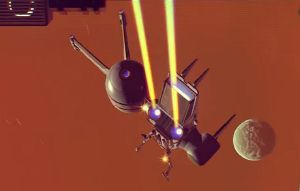 While most ships in No Man's Sky are symmetrical, this system contains at least one ship that is quite asymmetrical with a big round globe on one side of the fuselage but not the other.

This system has been visited by a large freighter with a rotating section similar to a ship seen in the Ondairasker system, The Colbert System, and the I've Seen Things trailer.