Trace of Itvaler-III is a Multitool

The Trace of Itvaler-III (aka: Kurgan's "Justice Dispenser") is an Experimental Multi-tool in No Man's Sky.

The S-class of this weapon has the following beginning stats: (needs to be updated for Beyond)

No reload is necessary; warping in this system or traveling by Portal using the glyphs below already spawns this Multi-tool. Travel to the Lost Green Planet (on PS4 it is named S class cabinet marked w comm) and go to the local coordinates.

As of the Beyond update, an A-class version is in the old location (Original REDDIT Post), and due to this confusion a few players felt as if this was an incorrect post, so when arriving on the other side of the portal, inappropriate messages are received by the player. The updated info is correct. 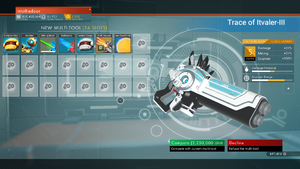 The Trace of Itvaler-III
aka: Kurgan's "Justice Dispenser"
NEXT Image from PS4

Images taken during NEXT on PS4

Visit the Other Galaxies Community