It is a planet with very low atmosphere, meaning that some resources can be found in abundance, but that condition put an elevated strain on the support systems which will be depleted at an accelerated pace. 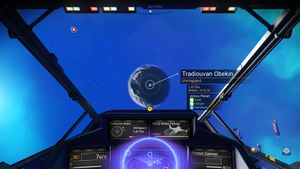 The resources on Tradiouvan Obekin are Ordinary. Some of the minerals that can be found are:

As a low atmosphere planet, big piles of valuable resources can be found.

The thin atmosphere at Tradiouvan Obekin make animal life development impossible, so it is devoid of any fauna. 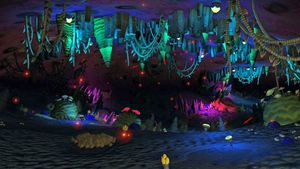 The ground flora at Tradiouvan Obekin is limited to some sporadic mushroom-like plants and the Thamium9 and Marrow Bulb yielding plants.

Inside its caves and at the canyons, the flora is a little more developed, featuring some grass and bushes. 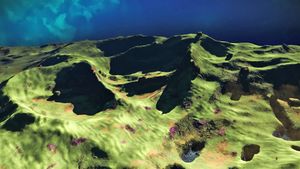 Tradiouvan Obekin is a sandy planet marked by its desolate dunes, canyons, mountains, and pits.

This planet also has long cave systems that can protect the travellers from the high pressure that affects the support systems. 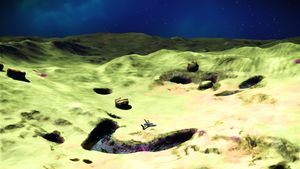 Because of the low atmosphere condition of Tradiouvan Obekin, the environment is very clear to the sight.

The skies have a blue hue, as the atmosphere offer a clean view to outer space and its nebulas. And at night, even the ground is affected by that blue hue.

The low atmosphere of this planet makes the life conditions hard to sustain, so it is barren of any kind of life forms or civilizations.