From No Man's Sky Wiki
(Redirected from Trailblazer Firm)
Jump to: navigation, search
The subject of this article is from the Synthesis update.
The information from this article is is up-to-date as of 18 February, 2020.
This page fills the role of Headquarters for a Company organization. The information found here represents a user-created company that is a creative addition to the game.

The Trailblazer Corporation is a multi-industry conglomerate.

The Trailblazer Corporation is a multi-industry conglomerate which specializes in data management, news media, and criminal justice services.

The company is a Limited Partnership run by Chief Executive Officer and Chairman Carter Brentwood in conjunction with the Board of Directors.

The mission of the Trailblazer Corporation is to identify and provide needed services to the galactic community. Specifically, we aim to establish an environment of stability and prosperity through legal services, research & data collection, and other beneficial operations.

The conglomerate was founded as the "Trailblazer Firm" by Carter Brentwood, The company, which originally specialized in space documentation, was first established inside of a frigate known as the "CV-2 Trailblazer". The company was nomadic and had only temporary employees which often comprised of local citizens of whatever star system the corporation was operating in. The Trailblazer Corporation joined an alliance of businesses, known as the United Corporate Alliance (or UCA) shortly after creation. However, this period would be short lived. The corporation and the UCA mutually parted ways after public disagreements between the company's founder and UCA officials.

During this time, Brentwood & Vito, LLC, was founded by Carter Brentwood and UCA Chairman Salazar Vito. This company, the first subsidiary of the Trailblazer Corporation, was a law firm and marked the first expansion of the Trailblazer Corporation into non-data industries. During this time, the Trailblazer Corporation enrolled in the United Federation of Travellers, one of the largest alliances of civilizations and businesses. Vito quickly departed from the law firm after Federation officials raised concerns that he had been banned from the group due to past behavior, however, the company continued under the name of [[The Brentwood Group] and replaced its former founder with Executive Partner Kerra. This was the companies first outside hire.

While participating in the Federation, the company noticed marked levels of growing acclaim. When Carter founded the United Celestial Kingdoms on June 12 of 2019, the Trailblazer Corporation was retained as the feudal civilization's legal experts. Following the collapse of the United Celestial Kingdoms due to internal political strife, Brentwood found himself with more time to devote to the company. With this, the Celestial News Network was created. The news and media company is the publisher of popular No Man's Sly newspaper -the Celestial Times. After reaching agreements with several civilizations, the Celestial News Network gained much renown. The company announced plans to create a board of directors and to expand in size on January 14, 2019 via the United Nations 42 discord.

The Trailblazer Corporation is a Limited Partner of the defunct United Celestial Kingdoms.
The governance of the company is bicameral. The Board of Directors is responsible for managing executive personnel, allocating resources to and providing direction for operations, and creating the company bylaws. Executive Management is responsible for the daily management of tasks, the hiring of employees, and making administrative decisions.

The Board of Directors[edit | edit source] 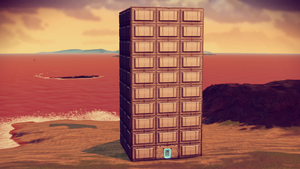 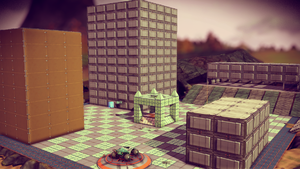 The Trailblazer Campus, the addition to the original HQ.

The former Trailblazer Corporation's HQ was a large concrete located on the defunct Trailblazer Campus. The campus was a large commercial development which included multiple buildings and a large central courtyard. The architecture was designed in early 2019, by the firm's Sole Proprietor; Carter Brentwood. Originally, a lone building was constructed atop the sandy shores of Olkesteus, the planet in the Ujeron system which the campus now resides. However, after concerns about the structure sinking into the sand (a phenomenon known as Anomalous Terrain Regeneration), the structure was rebuilt on a large pavement slab. These efforts failed to provide much more stability and by 2020 the company found itself relocating. 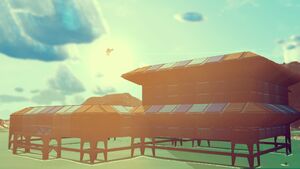 Celestialite Isle was created in 2020 as a response to growing ecological concerns regarding the old Trailblazer Campus. At this time, the company began moving central operations to the remote star system of The Independent Kingdoms. However, the Celestialite Isle is a new facility and according to company officials several operations are still being run from various outposts as the corporation works to centralize its' endeavors.

Coordinates have not yet been provided.

The regions listed below are regions operated solely by the Trailblazer Corporation or its Limited Partners; they also operate in several regions occupied by the various civilizations which enlist their services.
Xbox

Trailblazer Firm subsidiaries have discovered seventeen (17) star systems in and around these regions as of May 5, 2019.

Star Systems discovered by Trailblazer Firm subsidiaries are given a population tag, and corporate tag. These tags represent the amount of residences and various corporate/military structures in each system. The SPC (top chart) and SCI (bottom chart) classifications are shown below. Systems with no residences or corporate structures are known as Unoccupied.

Original Trailblazer policies were unsettled and inefficient. Many systems were not renamed, and those that were received only minor alterations. Updated policy now has a universal suffix system for renaming planets (while leaving the original root intact). The following are suffixes which may be used to name any system or planet discovered by a Trailblazer subsidiary:

Alpha and Omega Expeditions each have their own diverse nomenclature regulations as well which you can view on their respective pages.

Residential and corporate addresses are assigned using the Trailblazer Address System (TAS). A casual address would list the planet name followed by 'of' and the star system which it resides in. So if one wanted to denote planet Olkesteus in the Ujeron system; it would be recorded Olkesteus of Ujeron. A formal address is similar but includes the region name. An example of a formal address noting the planet Olkesteus located in the Ujeron system within the Ehansh region would be recorded as Olkesteus of Ujeron, Ehansh.