The Trijen Collective is a civilized space community.

Widely spread out across space, various groups of the Trijen Collective wander the universes completely under their own will and direction. For extended periods of recorded history the Trijen Collective limited their exploration to the Euclid galaxy, wandering vast stretches of it. Due to the alteration to the known universe commonly referred to as the "Atlas Rises" event, catastrophic damage was inflicted to the structure that served as a Capital Base for the collective. The AI running this structure, known as the PGSV What Are The Civilian Applications? , decided to shut down operations and relocate to the Eissentam Galaxy.

Culture and social matters are what unite the Trijen Collective and these can be summarized in a few points:

- Expand knowledge: Exploration is good and worthwhile on it's own.

- Expand civilization: Communication or visiting other civilization is good. Constructing monuments or bases for the enjoyment of others is even better

- Expand Life: There is great responsibility and power in being able to name an entire planet's species. This should be treated as a gift and repaid by doing no undue harm to innocent creatures.

For a list of known players, see the Census - Trijen Collective page. 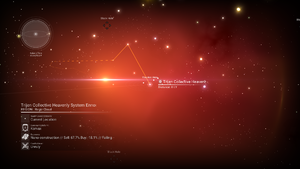 The inhabited planet of the Trijen Collective Heavenly System Ennona system has a portal on it. This portal is a 11 minute journey 15 degrees west of due south, by nomad exocraft, from the inhabited base. Since the portal and the inhabited base are on separate islands it is highly recommended that travelers bring a nomad with them. The PGSV that has inhabited this system is called "What Are The Civilian Applications?" or "WATCA?" for short. WATCA? has built up this base to be multi-functional, with a complete selection of harvest-able crops, atmosphere harvesters, a race track and all current exocraft technology. The portal coordinates to this planet are below.

But as a wandering and diverse group, this is only one region that the Trijen inhabit. Trijen Collective members or allies are invited to share the locations they have explored or inhabit on the Census - Trijen Collective page.