From No Man's Sky Wiki
Jump to: navigation, search
The subject of this article is from the Beyond update.
The information from this article is up-to-date as of 27 November, 2019.
This section is Fan Fiction. The information found here is not an actual part of the released game, but a user-invented addition to the wiki. Galactic Hub excepted. 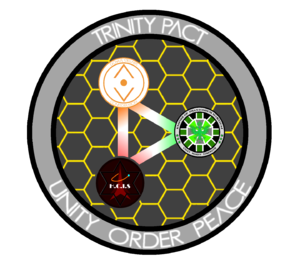 Symbol of the Trinity Pact, created by blek18

The Trinity Pact is a user-created alliance of multiple Civilized Space Zones.

The Trinity Pact is a developing alliance, originally formed between the Empire of Phantomium Marxium, the Helios Confederation of Independent Systems, and the Domus Stellaris Confederation. The alliance is a subcommittee of the United Federation of Travelers, and is currently in its initial stages of setup.

About the Trinity Pact[edit | edit source]

The Pact has multiple different purposes behind its operation. In its most basic form, it represents the official military and trade alliance between the three founding civilizations. But it was created with the intent of bolstering the growth of the Xbox Universe, and to bring more than just its original members into the fold. The alliance intends to achieve these goals through a few different means, which will only be available to the Xbox Universe:

The Pact is currently settled on a single-planet star system. The Dawnfire System serves as a meeting point for all types of political disputes. There are no limits on who may build on the capital planet, dubbed Aetheres. The Pact simply maintains a policy of order and civility on the planet.
On Aetheres, you will find Trinity Tower Embassy, the center of operations for the Pact. It is a place of peace, and serenity. Due to its location in the Northern Arctic Circle of the planet, the sun never sets on the Embassy. A sort of twilight state begins when the sun dips down to the horizon, but it never truly gets dark at the Tower. As well as being the main headquarters of the Trinity Pact, the Main Chamber is open to the use of any Trinity Pact Ambassador to conduct political meetings outside of Pact business.

Currently, the Trinity Pact is in the process of discerning an official appointment process. Further information will be posted.