Twin Vision is a planet.

It is the second largest planet of the three-planet system and has no moon. It was the location of the memorial and commemoration of the peace accord between the Empire of Hova and The Bez-Harr Concern during the Pathfinder era. The planet has changed During Atlas Rises from toxic to viridescent with mild weather and is home to the Whole Foods Market base created by SpaceArtGek. 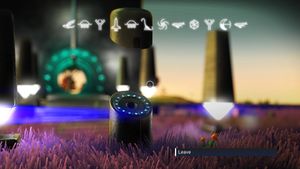 A message beacon was placed by SpaceArtGek representing Amino Hub in the Federation of Travelers commemorating the peace accord between the Hov and BHC is thought to be buried somewhere in it's oceans from the prior Pathfinder release. 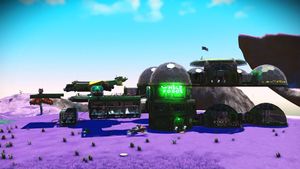 Twin Vision is home to the Whole Foods Market Base - an excellent place for crafting and making units.

On 09/27/2017 SpaceArtGek completed the Whole Foods Market (Olympic Race Track) (Farm). It contains a farm for crafting items to make units and a terrace to enjoy sandwiches. Travelers can dine next to the antimatter cylinder and enjoy scenic views of the ocean. It also contains an Olympic Race Track on the top of the base.