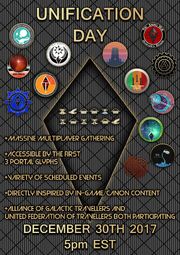 Unification Day is a fan-fiction event.

Unification Day is a player-created gathering of civilizations scheduled for December.

Reddit user Galactic_Glory was inspired by an excerpt from a crashed ship's distress beacon, who suggested applying the concept to the United Federation of Travelers as a large-scale gathering. The Federation then worked to involve as many civilizations as possible, regardless of whether or not they are Federation-allied.

A team of No Man's Sky players have been put together to help organize and manage Unification Day.

A "Unification Day Council" has been formed to help make decisions (such as location, events, date, etc.)

Although essentially a fan-fiction / player-created event in its final incarnation, the concept of Unification Day does come directly from No Man's Sky itself.

The logs reveal that the pilot was celebrating a festival known as 'Unification Day'. Groups of similar minds, unable to meet but attempting to find one another, to claim worlds across time and space. Once a year their various alliances, federations, hubs, and empires united to remember all that they were, and could become in time...

- Excerpt from a Distress Beacon at a Crashed Ship

Unification Day will be accessible to any users with the first 3 Portal Glyphs. The Unification Day system, which may or may not change after 2017's event, is located in the Delta Quadrant.

Various civilizations have provided nearby attractions and resources for travelers to utilize.