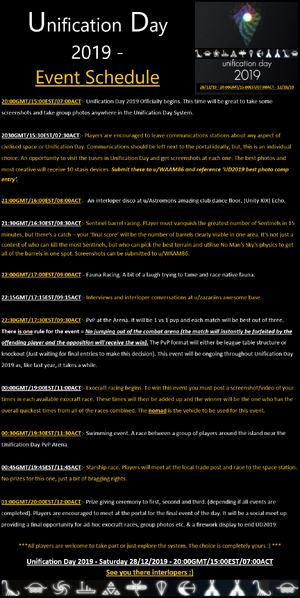 Unification Day is a fan-fiction event.

Unification Day was a player-created gathering of civilizations the occurred on December 28, 2019 (Dec 29, 2019 in Asia/Oceania).

Based on the original premise of Reddit user Galactic_Glory, it was inspired by an excerpt from a crashed ship's distress beacon, who suggested applying the concept to the United Federation of Travelers as a large-scale gathering. The Federation then worked to involve as many civilizations as possible, regardless of whether or not they are Federation-allied.

A team of No Man's Sky players have been put together to help organize and manage Unification Day.

Although essentially a fan-fiction / player-created event in its final incarnation, the concept of Unification Day does come directly from No Man's Sky itself. 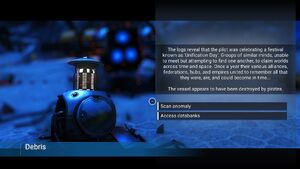 The logs reveal that the pilot was celebrating a festival known as 'Unification Day'. Groups of similar minds, unable to meet but attempting to find one another, to claim worlds across time and space. Once a year their various alliances, federations, hubs, and empires united to remember all that they were, and could become in time...

- Excerpt from a Distress Beacon at a Crashed Ship 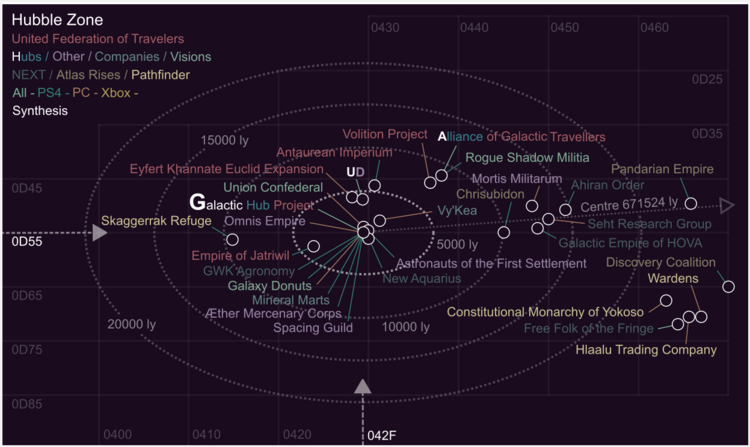 Various civilizations have provided nearby attractions and resources for travelers to utilize.