From No Man's Sky Wiki
Jump to: navigation, search
The subject of this article is from the Atlas Rises update.
The information from this article is up-to-date as of 23 July, 2018.
This page fills the role of Embassy for the United Federation of Travelers.
The information found here represents a user-created alliance of Civilized space zones that is a creative addition to the game.

There are multiple game-release versions of the United Federation of Travelers embassy page. 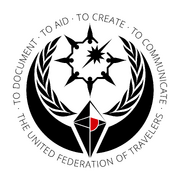 Emblem for the United Federation of Travelers.

The United Federation of Travelers is an alliance of civilized space zones.

The United Federation of Travelers, more often just called the Federation, is an alliance of Civilized space zones (communities of players) in Euclid, Hilbert, Calypso, Budullangr, Eissentam, and other galaxies. It was formed on April 15, 2017, and went public on April 25, 2017. The Federation's purpose is to unite civilizations behind universally beneficial goals without hindering any sovereign civilization's customs or practices, and to assist in the founding of new civilizations in the five most populous galaxies. While fan-fiction/roleplay elements can be involved, the Federation places no official restrictions on, and makes no specific endorsements of, any fan-fiction. Federation Civilizations are left to manage their own fan-fiction/roleplaying/lore.

To Document, Aid, Create, and Communicate. These are the Federation's primary goals. All Federation civilizations are expected to follow them and encourage their citizens to follow them.

To document all No Man's Sky-related information on a single Wiki (this Wiki). Additionally seeks to have a centralized database linking to various Reddit-based NMS info (Coordinate thread from r/NoMansHigh, bug thread from r/NoMansSkyTheGame, Fauna Guide from r/NMS_Zoology, etc). This (still incomplete) centralized information source can be found here: Interloper's Guide to the Galaxy - Complete Guide to NMS.

To aid groups with the establishments of new civilizations in the five most populous galaxies (Euclid, Hilbert, Calypso, Budullangr, and Eissentam), and to aid any existing civilizations.

To communicate with known Civilized Space zones. To provide a place for new communities to announce their plans and news without being buried by other NMS threads. To clearly list contact info for Ambassadors/Representatives of civilizations, and provide a place for civilization Ambassadors/Representatives to communicate with each other.

Image Map of the Federation as of July 22, 2018.
Clicking on a civilization in the picture causes the browser to load the appropriate article / Mouseover = Coordinates. 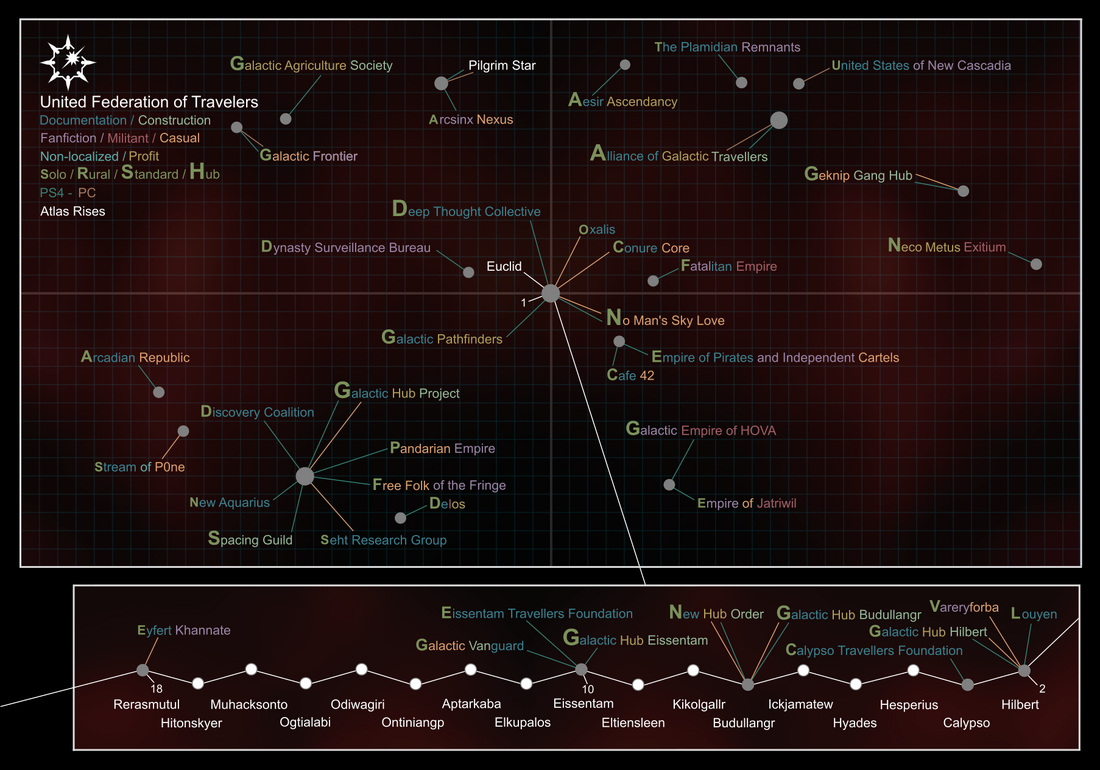 Coordinates are for their capital systems, which may or may not include a capital planet. If the coordinates say "PART4", just leave that part off while using Pilgrim Star Path (or other plotting apps). The fourth set of coordinates isn't directly used in mapping, so it's not needed (but leaving it off entirely messes up the formatting).

The "Classification" section refers to Civilization Categories, which are further divided into two sub-categories: size (Hub/Standard/Rural/Solo/Abandoned) and type (Documentation, Militant, etc). Size categories are further specified as Estimated (E), meaning the tag is essentially a guess based on varying amounts of evidence, or Registered (R), meaning the tag is based on an actual civilization census.

Any civilizations seeking Federation membership status must meet at least one of the following two criteria:

If your civilization meets those criteria, you can then follow the steps below to apply for Federation membership:

After your civilization is accepted,

"Citizen of (Your Civilization)" user flairs will be added. Citizens may assign their own flairs by clicking "Edit" next to your username on the sidebar, below the Subscribe/Unsubscribe button (may not appear on mobile). Note that it may take a while before newly-joined civilizations are added to Federation Maps, as those currently have to be manually updated, making them more difficult to update.