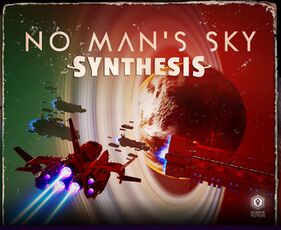 Update 2.26 is the 73rd official update to No Man's Sky and was released on 22 January for all platforms.

We’ve released a small patch today to introduce some new items to the Space Anomaly's Quicksilver shop. The Synthesis Bot has an exciting and diverse range of products planned for this year; we’ve enjoyed reading your requests and ideas and hope you’ll enjoy what we have lined up!

Complete multiplayer missions at the Nexus to contribute to the research project, and unlock these exclusive Red, Green and Blue trails to apply to your jetpack exhaust.

Community Research progress may be tracked from your Mission Log in No Man’s Sky, or from the Galactic Atlas.

Another planet has begun presenting signs of instability, detected by Priest Entity Nada's specialised equipment. This time, the disturbance’s epicentre is originating from somewhere deep upon a distant planet, far below the sea level.

This weekend, Travellers may sign up at the Nexus to participate in the event, and earn generous Quicksilver rewards.

The Iterations aboard the Anomaly are expressing increasing discomfort about these ongoing disturbances. Speak to Iteration Mercury before venturing out on the mission for more information.

It has been so exciting for us to see the variety and ambition of ByteBeat compositions the community has been creating! It was impossible to look away from them, even over the holiday period. There are far too many brilliant creations to feature them all, but here is a small selection of our favourites so far…

This atmospheric track, linked to a mysterious light cube, by Action Pants Gaming.

These funky riffs demonstrating the power of synchronising multiple ByteBeats, by Nano & Sam.

This impressive melodic composition, beautifully presented in their “Arpeggio Temple” base, by GrandWithCheese.

This creative use of the ByteBeat’s distance attenuation by TheAtCol.

This gentle, melodic lullaby written for the Qitanian Empire by Markus Schmitt.

And finally, this incredible reproduction of Pachelbel's Canon by Hilightnotes.

A minor game update to support the upcoming shop items has been released on all platforms today. We have another, more substantial update arriving in the not-too-distant future, and much more planned for 2020 that we look forward to sharing with you!