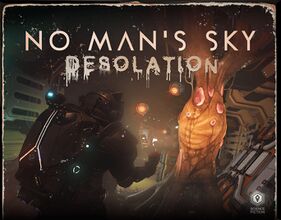 Update 2.60 is the 92nd official update to No Man's Sky. It was released on 17 July to all platforms.

The remains of hastily abandoned freighters float adrift through space. Those who dare to explore these haunted corridors will find great reward – and great danger!

Derelicts are found all across space, but Travellers seeking salvage opportunities can acquire specific coordinates from a local scrap dealer – for the right price.

Derelict freighters are procedurally generated, with no two interiors the same. The only way to learn the fate of the crew is to step through the airlock door and find out for yourself…

Uncovering the freighters' secrets won’t be easy, as these derelicts are full of danger. As the crews fled, systems failed: the lights are off, life support and gravity are offline, and the security AI has gone haywire…

Some freighters have been infested with a sinister alien presence. Whatever you do, do not disturb the nests…

Each derelict freighter has a unique story to tell. Uncover hints about each crewmember’s fate by retrieving ship logs and personal effects, and ultimately gain access to the captain’s log for insight into the vessel’s final hours.

A new technique for bloom lighting has been implemented, resulting in enhanced colour vibrancy and a softer ambience around light sources.

The intensity and quality of lens flare has been revisited, and the sun is now an additional source of lens flare. Lens dust is much more evident, and the halo effect surrounding bright light sources is subtly animated.

New volumetric light sources have been added, and the Exosuit torch beam is now textured with realistic lens artefacts, enhancing the atmosphere of derelict freighters.

Extract upgrades from derelict freighters and use these personalised, unique items to both upgrade your freighter and make it reflect the history of ships you've scavenged.

As well as improvements to your capital ships' warp drive, new fleet upgrades can be found and fitted to your freighter. These boosts will permanently improve the abilities of your frigates as they explore the universe.

In addition, freighter upgrades are no longer restricted to the technology inventory, and may be installed in the general freighter inventory.

Your capital ship can now be recoloured from the Upgrade Control terminal on the freighter bridge.

Freighter storage boxes can now be accessed directly from the inventory screen tabs.

Teleport Modules may now be built aboard freighters, allowing direct teleportation between bases, space stations, and your capital ship.

Multi-Tool weapons have been rebalanced with a focus on a faster-paced, more dynamic, and more satisfying combat experience. Sentinel health and weapons have been tweaked, and combat reinforcements now spawn in greater numbers.

Weapon visuals, including crosshairs, muzzle flash, camera shake and projectile visibility have all been improved.

Mining asteroids in space now has the chance to reveal an Anomaly Detection Beacon. These single-use devices can probe local space and detect nearby anomalous objects for investigation and potential rewards.

More varieties of multiplayer mission are available at the Nexus on the Space Anomaly. Group up with other Travellers to survey the life and geography of exotic planets, or assist lost souls whose starships have met an unfortunate fate.