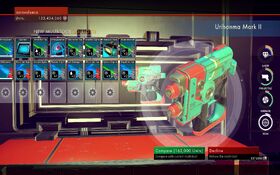 Urihonma Mark II is one of the Multi-Tools in No Man's Sky.

It is white, aqua, and grey in color with white and orange stripes on the barrel, and purple inside the trigger guard.

The tool upgrades do vary somewhat in this model. Apparently an armourer has been tweaking the adjustments, then placing the tool back on the sales rack.

NOTE: Items marked in blue are common to all four editions.