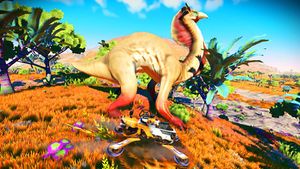 These megafauna diplos inhabit the lush planet Elysium. Both genders are approximately 6 meters in height, and both are mostly shades of brown and red. Both are "arched-back" diplos. Their front legs end in feet with three finger-like toes or appendages, while the rear feet more closely resemble pig hooves from Earth biology.

The "None" gender, larger of the two, is immediately distinguished from the other gender by the large spikes on its back. Other differences include a large protrusion from its chin/lower jaw, green eyes, and an orange half-oval headpiece.

The "Asymptotic" gender is a beaked diplo with almost tiger-like stripes, particularly on its face and upper neck. Other differences include yellow eyes and two large red "sails," one protruding from the back of the upper neck, one from the front of the lower neck.