From No Man's Sky Wiki
< User:G5457s
Jump to: navigation, search
This section is Fan Fiction. The information found here is not an actual part of the released game, but a user-invented addition to the wiki. 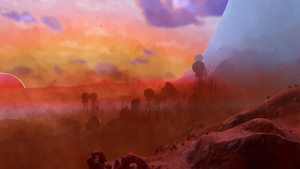 The Eyfert Khannate's capital planet is known for its near-endless incendiary dust storms. The planet is quite literally, on fire most of time.

Despite gravitating towards and being used to extreme-weather planets and moons, even Kinderkins (humanoid race resembling human children, colloquially known as Space Kids) need a short break from such hostile conditions from time to time. Their harsh desert homeworld all the way at Euclid has a gentler moon where they go to relax for a bit. Take Khan Ezegnegch, for example. The leader of the Eyfert Khannate lives a busy life, ensuring peace, order and prosperity within his civilization. But all the responsibilities from being the ruler greatly burdens him. Sometimes, not even his little rest house in the capital is enough to soothe his pains. During a busy day at work, he secretly sent one of his elite explorers to search for a planet that can soothe and relax him. It doesn't matter what region, whether it's in the Tenhoe Nebula or one of the FNAF regions.

"Yo Ez, this is one of my best explorers, or should I say, the best explorer I got, Sudlakh. He'll be the one to do your mission, whatever that is. Now if you'd excuse me, I have to review some damning evidence of GITGUD's activities. Those father******* rich ****s think they could rule an entire civilization just because they're rich... Those bastards from Apstey-Sovos... Dealing with them... grumbles endlessly"

"Ah, yes. Kid, sometimes all this work being leader really stresses me to the point that I'm freaking out EVEN IN MY OWN HOME! I don't think the capital is enough anymore... *sigh...* So I have a task for you. Being Naman's top Elite Army Explorer, I'll give you access to my The Defeat of Death Starship. Go out to the stars and find a planet for me. Something that's more than enough to soothe this really stressed out civilization leader's pains. It doesn't matter where. Tenhoe, FNAF, Pobelar, hell even use The Nexus and sneak into someone's Base so you can get a free ride to Euclid or some other galaxy. Just find me a planet where I can calm down and PRONTO!"

"I am honored, great Khan. I will do my best in this mission!"

"I forgot to tell you. Keep this a secret. NO ONE must know about what you find, not even Naman, any of the higher ups or even my close friends and relatives, wife and kids included. I want that planet to be mine, and mine alone. And yours too, since you'll be the one to first discover it. If this gets out to a single person besides the two of us, whether intentional or not, it's off to the RUBHAN STARIGO with you! FOR LIFE!" 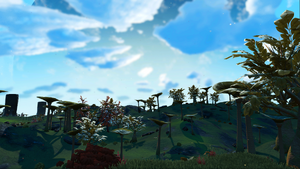 Lush moon Ugina 78/W7 is criticized by the Khan for its occasional heat storms. 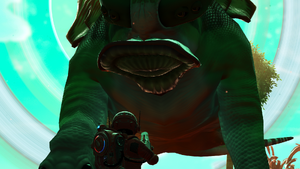 Lush planet Bessierm XVI is criticized for its small size and its horrifyingly nightmare-inducing megafauna.

Sudlakh painstakingly searched far and wide to find what he thinks are planets that can calm the Khan. FNAF, Tenhoe, even new regions not part of the Tenhoenic Declaration, he explored. He even went into the Nexus and sneaked into multiple people's bases (and getting out of there ASAP of course - trespassing private property bad!) in hopes for finding what the Khan wants. (In-game) Months passed by. He presented the Khan his findings and they secretly went to each of them, with the Khan scrutinizing them more harshly than Iteration Cronus and a world-famous potty-mouth chef from another dimension combined. Unfortunately, none of them satisfied the Khan. Here are his most brutally savage outbursts:

On the lush moon Ugina 78/W7: What in Zayuguanch VIII's *** is this? Green grass and blue skies. Sure it's like that planet except in moon form, but this is relaxing... and now it's boring. Nothing sp... *Weather warning: Incoming Storm*. You know what? **** this moon. Even hell is better than this rubbish. It rightfully belongs in this ****hole prison system.

On the lush planet Idius XII: Hey, this ain't too bad! Though the skies, land and color palette make those so-called artists seem like the greatest and most innovative artists of all-time, I quite like it! The mountains, the winding rivers, the beautiful underwater views, and... *a group of random Tyranocae predators attacks Ezegnegch the Khan but he dodges it anyway, then he violently kills them and eats all the dead carcasses raw* BLEH! These T-Rexes are ******* RAW! The drinking water... is RAW! In fact, the whole planet IS RAW! You know what? **** this planet. Even my rice-water diarrhea is more artistic than this planet. And it's TOO ******* RAW. You... GET OUT. Me... GET OUT. OF THIS RAW **** OF A PLANET!

On the lush planet Bessierm XVI: So this is the so-called beautiful faraway lush planet you've been dying to show me, you ******* monkey. Look at all these wonderful, massive, towering abominations from the very depths of my polyp-filled ***hole. WONDERFUL! *notices gigantic planet in the sky* Look at that huge-a** ringed planet up there in the sky! That tells me this planet's tinier than my d*** when I'm as scared as a man-child! You do know I HATE small-sized planets, don't you, even if I'm a small child-resembling humanoid called the Kinderkin created by a man-child from another dimension, who might be making me say all this cr**? And I don't want to be pestered by storms like that either. So GET OUT! I WILL ALSO GET OUT! ****!!!

Having waited months and now close to wit's end, he gave Sudlakh one more chance, sending him out one final time in a fit of rage (due to stress) to find that planet, before he sends him to the Rubhan. He revoked usage of his starship. He's using his own.

"Sheesh, is this the best we got? A ******* elite army explorer! ELITE. ARMY. EXPLORER! The best. OF THE BEST! ******* brat can't find that one planet! The best OF THE BEST! OY NAMAN, get two prison cells ready in Starigo Sigma, for THE BOTH OF YOU! He's YOU'RE BEST ONE, please yeah? F*** me this stress is making me say nonsense. If he can't finish the mission, both of you will experience what ******* Aptarkaba is like!" The Khan blurted out in frustration.

Now with his life on the line and the fear of receiving a death sentence and revocation of his status as a member of the Elite Army, Sudlakh pushed himself to the breaking point looking for the planet the Khan wants. He went to so many systems, pushing his lesser ship to its limits. He eventually stumbled upon a remote, undiscovered star system named Luziamens. Immediately he is ambushed by a large squadron of what seemed to be pirates. But because his ship is built primarily for exploration and not combat, he attempted to flee. Quickly looking around, he saw a lush planet in the distance and that's where he went. Surprisingly, he is able to pulse jump away. That's very unusual because normally, enemies would interrupt their target/s' ability to escape. However, he knew that once he reached the lush planet, he's going to be attacked. Once he arrived, he is even more surprised to find them already there, waiting. This is no ordinary group of pirates. A closer inspection reveals that they're not the typical pirate ship, but heavily-armed fighters built in Arkson that can outrun even the best of explorer-type starships. He is no match for them and is shot down. Fortunately, he made it to the escape pod in time, setting course to crash land on the lush planet. Even better, he modified the pod with top-notch jamming technology in case of situations like this. The attackers left the system, thinking he is dead. 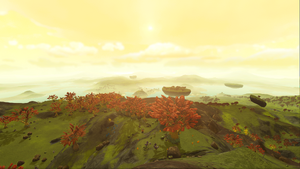 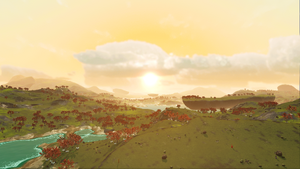 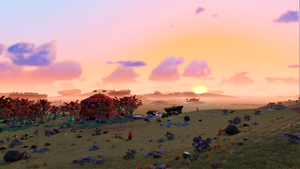 "I never ever want to leave this place. After going through all of that(+) and always sleeping with an eye open, this is a nice change, and I hope it stays that way..." Pretend the house built there doesn't exist.

Just when he thought his day isn't bad enough, he crashed on a lush planet in an uncharted system, which means there are no signs of sentient life, which means no Crashed Ships around and no way to escape. WONDERFUL! But things are about to turn around for the better, for the lush planet he crash-landed on, is just... breathtaking and otherworldly beautiful. There is a gentle breeze that blows almost all day. The yellow skies make the planet evoke a slightly melancholic and lonely feel to it, but it further adds to the tranquillity. The magnificent floating islands seem to defy the laws of physics. Most of the animals, while not the best looking, are quite friendly. As if sensing a troubled soul, they approach the troubled explorer, giving him some much-needed company.

"*sigh* The Khan is going to sentence me to death when I come back... But how can I, and how can he? I'm stuck here, maybe forever even... But at least... I am in the midst... of THIS! *cue epic music followed by panning out to reveal beautiful lush planet with too much exploding pus-filled zit plants*

For months the explorer lived a spartan life, one without worry. He forgot that he is on a mission to find a planet for the Khan, and his worry of being sentenced to death is all but gone. If it rains, it's always a gentle drizzle with peaceful overcast skies. There is a near-constant refreshing breeze so refreshing, it refreshes his mind, body and soul, especially when the views are refreshingly refreshing. The food is absolutely delicious, whether vegetables, meat, or abyssal horrors. Hostile fauna are far and few, but there are a lot of bloated gas flora in some areas. Never has he built a single base or structure to shelter him from the elements. All he has to do is to either find a safe place or kill the occasional predator or group of predators (which are the most delicious kind of meat, tied with the abyssal horrors and both can be eaten raw) before he gets a good night's sleep under the stars. Everyday he'll just walk around and admire the scenery and tranquillity, going to wherever his heart leads him to. But as a member of the Elite Army, he will always keep his abilities on par with the rest even if he's in paradise.

"I never ever want to leave this place. After going through all of that(+) and always sleeping with an eye open, this is a nice change, and I hope it stays that way..." The explorer said in a slightly melancholic tone, sitting down at the edge of a floating island, smiling at the beautiful sunset.

"Well, thank goodness you're alright! DO YOU KNOW I'VE BEEN LOOKING FOR YOU FOR THE PAST SEVERAL MONTHS?!!! YOU REALLY WORRIED ME, NAMAN AND THE ELITE ARMY! ALSO THINK OF THE COUNTLESS WAYS I HAD TO DO TO EXPLORE IN SECRET!"

"Of course not! Not like this! There's no way in Hurenima I'm sending you to death penalty under these circumstances!"

"Seriously stop crying. You look like a waste instead of a top-notch Elite Army Explorer. Now... let's get out of here for now. Everyone is worried about you. But... don't forget. Don't tell anyone about this or I'll really send you to Rubhan Starigo, got it?"

"Excellent. Even if you've stayed in paradise for so long, don't forget your mission, and don't let your guard down. Let's get outta here! Then we go back here and enjoy what we found AHAHAHAHAHAHA!"