From No Man's Sky Wiki
< User:Intothedoor
Jump to: navigation, search
The subject of this article is from the Atlas Rises update.
The information from this article is up-to-date as of 23 July, 2018.

Birth to Ghub 2017 is a GenBra Space Corp Directive

This answers the question: How Long would it take from Birth to get to the GHub? 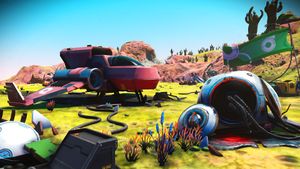 Birth, from the beginning we go

STARTING: I immediately began my base building quests, and finished those fast, then I hit hit the Artemis Quest as fast as I could too. Always kept plenty of

's handy along with lots of supplies that are requested early in the game. I never worried about my Ship tech, or much upgrades to my exosuit. I kept my starting ship the whole time right until the end when a beautiful Red Exotic Guppy landed in front of me. Most of all I didn't worry about money, when I needed money I would craft a couple Heat Capacitors or similar simple item.

Able to accumulate 5 glyphs and get within 106 jumps from the Ghub. I would need at least 14 D of the 16 glyphs to portal into the Shungka Void directly. As of now I have wasted an hour or more trying to return to already-found graves; I am not able to re-engage the site for a new glyph. In one instance, a Traveller in a Space station allowed me to pay him 100

twice, but on the second try the grave would not allow me to collect a second glyph.

Got the Glyphs To Spam[edit | edit source]

At about 33.5 game hours I finally got a grave to give me a glyph twice. I had just spent the last 4 hours scanning the Zoology on The Unification Planet; this gave me my first full planet scanned. Other then visiting Nada and Polo a couple times, I am not sure what triggered it. Thru the next hour I used the method of going to the Space Station, buying some Plutonium and flying back to gain another glyph. it didn't take long, and at about 34.5 game hours I completed the task and gained all 16 glyphs. I only needed 14 to make it to the Ghub.

The NHO Has decided that assisting with Unification Day 2017 will be the new priority, along with the new-found Diplomatic Mission of working with the United Federation of Travelers. We will be assisting with Euclid as an aid only, our soul belongs in Budullangr.

Get To Budullangr[edit | edit source]

To reach The New Hub Orders' at the Core of the Budullangr galaxy.