From No Man's Sky Wiki
< User:Intothedoor
Jump to: navigation, search
The subject of this article is from the Beyond update.
The information from this article is up-to-date as of 27 November, 2019. 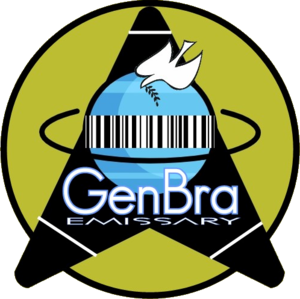 This is a collections of historic stories of GenBra Space Corp. This is more than likely incomplete as so much has happened over the last several years and versions of the game. Most importantly I wouldn't have been able to do what I have without the many other players who have helped me and made the game more enjoyable. Special thanks to AstromonX for his commitment to the GenBra Brand.

This game is my newest started at the beginning of NEXT, but it wasn't that easy. The long story takes me back to the beginning of playing NMS, the start of it all. When I first began mid-2017 I didn't know what I was doing eventually Atlas Rises came and I went with gusto driving thru the story line and in not so slow fashion coming to end of the Artemis Quest line of the time which brought me to the Purge. This was the moment where a play decides to select one of four colored galaxies (what I didn't realize at the time was I could have backed out and stayed in Euclid). I choose Budullangr not knowing a thing and before I knew it I began my journey in this galaxy. I was in Budullangr for almost the entirety of Atlas Rises, building the New Hub Order and meeting some fun new Travellers. One of my most cherished creations was the The Budullangr Hub Trail a 70 star system path that led players from all over the galaxy to the Core, but being in the seventh galaxy meant a lot less players to actually interact with. What happened NEXT was un-planned.

When NEXT started I found myself completely dead in the water, this game would not load and I could not play it, it took over a month until this legacy save (my oldest save) could play in Budullangr again.

Of course I still wanted to play so I decided to start a new game-save. But this was not in the traditional sense that most players experience. The BHUB was in full swing and there were about a dozen people helping establish star systems with the correct BHUB naming convention. At this time NMS was not fully patched or fleshed out and I will admit I took advantage of one little loop-hole (now not possible). First I deleted my Permadeath save (Thus that game-save is retired but can be reached by swapping out game files) and I started a brand new Normal game while joining a friend (the in-famous Santa Goat), causing me to begin anew but in the seventh galaxy. Perfect! This newest save was quickly assisted by my fellow BHUB players and gained all needed supplies quicker than ever.

After my Legacy Budullangr Save came back online (Hello Games finally patched it enough) I had two game-saves in the same galaxy which became confusing. Almost all NEXT Budullangr documentation was created by my Newest Bud-save... the legacy Bud save was parked at the core and wasn't played much until things quieted down in the BHUB. Towards the end of 2018 AstromonsX and myself (both with Legacy saves at the Bud Core and 'brand new' saves in the BHUB) found ourselves looking for the next adventure, and that's when the Great Galactic Adventurers were born.

Because of the time I have been in this galaxy I have made it one of my priorities to remain active here, continue the journey throughout the galaxy and continue exploring the great green core.

This is a Legacy game save and one which is current today. I began this game in late 2017 in preparation of being able to fully enjoy Euclid activities, most notably the first Unification Day'. It was in the early days that I met Captain Slade who created the EPIC civilization and I quickly feel in love with the pirate life. Now the type of pirates I am talking about are the yo ho ho and a bottle of rum type and not the kind that would steal your kittens. Fun and entertaining, EPIC has grown over time and now is as entertaining as ever. Much of the communication and discovery information is located on their Amino App channel, so I have aided in getting some of that info over to the gamepedia wiki. EPIC has aligned themselves with much of the others who are way out on the fringe of the Delta Quadrant, and combined they call themselves the Free Delta Initiative or FDI. The FDI has been hard to document because they aren't exactly a civilization or a traditional alliance, so current wiki information is scarce and not current. Another big player in the Delta quad and FDI is the civilization Cafe 42 which is a rather wonderfully large group filled with all sorts of game play and styles. This connection was important as Cafe 42 assisted the GenBra Branch Great Galactic Travellers thru multiple galaxies on our way to and past galaxy 42

Started near the end of Atlas Rises as a challenge to see if I could get to the core and earn the PS4 Trophy (which wasn't completely earned until the start of NEXT). I got side-tracked on my way and stayed in the Galactic Hub Project for a period of a couple months. Before I knew it NEXT was on it's way and I needed to prep the other Branches.

Of the GenBra Branches this one has seen the least amount of play time. Played for under 100 hours; however, the adventure has always been exciting. As most Permadeath players will tell you once you get past the initial crash and repair you begin to collect the needed materials and build a safety net around yourself. This makes play relatively free of issues. GenBra Permadeath is definitely the least wealthy branch, carrying only a B Class Experimental, and flying decent ships, we are not laden in gold or S Class like the other GenBra Branches. Still all glyphs are learned, money has been earned and bases have been established. As of now Permadeath has been put in partial-retirement at the Calypso core.

History is being made now, we went on a long trip thru the galaxies and made it to galaxy 42 until we got a quick jump to galaxy 255. Beyond hit and everything changed. all the Branches became one, the game became in essence the way I had always played. History to be made.... more to come!

Visit the Other Galaxies Community