Uta-Koura is a planet in the HUB8-V-1A1 Lambda Nu system.

In a system that is primarily known for harsh, arid worlds, Uta-Koura stands alone. The planet surface is covered in vast, temperate oceans dotted with mountainous island chains. The islands host a wide variety of plants and animals, including several species of insectoid megafauna. Though intimidating, these creatures are typically not aggressive unless provoked. 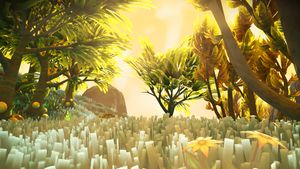 This planet has served as something of an oasis for settlers in the system, namely clientele of the Nu'at Corporation (player lore), which controls the neighboring wildlife and research world, Nu'at Preserve.

Exozoologists have puzzled over how such large herbivores could have evolved on a world composed primarily of small islands. In recent years, it has been theorized that the vibrant golden leaves of native trees - the diet of many large Uta-Kouran species - possess unique properties that allow them to gather and process sunlight more efficiently.