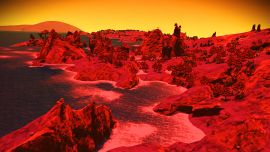 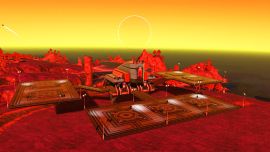 In a system with a green star above sapphire-blue oceans, the planet Vermillia may be the reddest world in the Hub. An anomaly in the ozone layer shifts the sunlight to lower frequencies, rendering the sky—and the entire landscape—a garish scarlet hue during the daylight hours. Only at dawn and dusk does the planet appear as truly is: sporadic islands of red stone, deeply grooved by erosion from the constant rain, flourishing with a wide variety of trees and bushes over pink and red grasses. The ocean sports a full spectrum of iron formations, detritum growths, and underwater flora—including Rigogen, of the unique flat-disc variety.

The rain never stops on Vermillia; it is only interrupted by storms of more intense rain, which drop the temperature to -68 °C—only about 7° colder than the planet’s nighttime temperature. Daytime conditions are much milder (7 °C), though the rain continues.

There are 10 species of animals on Vermillia, some aquatic, one airborne, and the rest land-dwellers. None are particularly large or remarkable.