Vesta Prime is a planet.

Vesta Prime is one of the many procedurally-generated planets in the No Man's Sky universe before the change of the generation seed.

It is a desert planet located in the Utwarzers XI system. The surface appears gold with light blue spots scattered over the planet's surface.

The desert is fairly barren, with small patches of grass here and there. There are large, curved, skeletal bone-like structures jutting out of the desert, which could be some sort of flora. 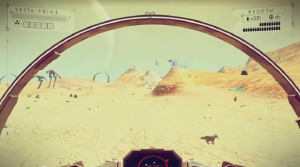 Vesta Prime is home to a variety of small mammals, including an unnamed quadruped caprine and flying pterosaurs. A species of gigantic, bipedal sauropods with spiked backs and jagged legs also live on this planet. Each leg contains two knee joints; the upper bends forward like a human knee while the lower bends in reverse like an ostrich.

The patches of blue might be an exotic type of rock or some sort of rare resource. 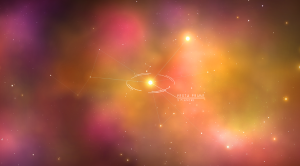 Vesta Prime is apparently also the name of a star system containing five planets, as evidenced in this photograph posted to Sean Murray on Twitter by The New Yorker.