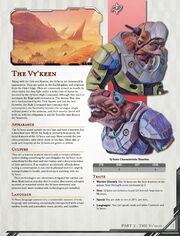 The Vy'keen are one of the sentient species in the No Man's Sky universe.

A Vy'keen on guard in a Minor Settlement

Along with the Gek and Korvax, the Vy'keen are humanoid in appearance. They are native to the Euclid galaxy and originate from the Outer Edge. They are commonly viewed as hostile by other races, but they fight under a strict code of honor as decreed by the Vy’keen High Command. Although they used to dominate the Edge until recession in The Aerons War, they were back-stabbed by the First Spawn and lost the war. However, the High Command (not counting their archenemies, the Sentinels) remains the strongest single military power in the universe, and their warrior blood still boils on with the obligation to aid the Traveller and destroy the Sentinels.

The Vy'keen stand upright on two legs and have a posture that is hunched over. While the body is primarily humanoid, the facial features of the Vy'keen can vary. Most notably the jaw often protrudes, with either three or two lips. Their skin is scaly and majority of the Vy'keen are green or yellow.

Prior to the NEXT update, the Vy'keen race appeared to have either a humanoid mouth, monkey mouth, two extra large canines, or two short tentacles. One of the Vy'keen plaques indicated a preference for tentacles, as it transcribes "those blessed with tendrils did extend them." The presence of these mouth tendrils or "mouth buds (two round lumps that are present on the lower jaw) may be gender specific, with those with mouth tendrils being described with the term "virile" in one of the Vy'keen missions. If so, they are the only signs of (potentially) sexual dymorphism.

An example of a typical Vy'keen conversation.

They are a warrior sentient species with a reciprocal honor system (doing something for one obligates the Vy'Keen to do something for the doer and vice-versa), and a deep veneration of their ancestors. If an explorer accidentally offends them during a conversation, it can end in physical violence, slightly damaged player's health, and decreased standing with the Vy'keen.

Their technologies are oftentimes designed for combat use. Most Multi-tool or starship that is traded, discovered, salvaged, received or rewarded within the Vy'keen territorial star systems have more combat-side technologies pre-installed.

Should players discover new words and wish to contribute to this wiki please visit Vy'keen (language research) to fill in the blanks.

The Vy'keen each possess a title indicating their status within their society's hierarchy. Their titles are mostly militaristic due to their warrior nature. Known titles include:

See: Saga of the Vy'keen

Vy'Keen Monoliths dot the landscape of many systems, where their interactions focus upon honor, combat and ancestral spirits.

Often the explorer is given a choice whose outcome is contingent upon Vy'keen morals. A positive reaction will bolster your standing with the Vy'Keen and often produce a reward and a greater understanding of the Atlas language. Upgraded weapons and artifacts are not uncommon gifts from positive monolith interactions. A negative reaction may injure the explorer, and drastically hurt their reputation with the Vy'Keen.

Vykeen plaques are delicate short records about the leader of the Vy'keen Alliance Hirk the Great, battles against The Aerons and their rage and belittlement toward Gek the First Spawns. As one of the plaque transcribed:

"It came to pass that the Great Monolith awoke, It heard the challenge of Hirk. Five times Hirk called upon it and was met by silence. On the sixth cry it awoke." --Memories of Nosurifro (Vy'Keen Plaque)

However, in a plot twist, one of your NPC technicians will eventually guide you to a plaque that shows that Nal was right about the Atlas and was spoken to by the Great Monolith. In his rage, Hirk struck down Nal and killed his followers. Your technician is one of Nal's last followers.

Vy'keen ruins record something totally different than their plaques. While Vy'keen ruins mostly regards their ancestral spirits talks, their inner strength enrichment and miscellaneous records of day-to-day lives. However, some still dedicated to Hirk the Great and other tribal leaders within the Vy'keen Alliance.

Relationship with the sentinels[edit | edit source]

The Vy'Keen have a great disdain for the sentinels and the Atlas, because Sentinels aren't naturally born like the three main races and other entities in the universe, also they do not allow true freedom for the hunt, destruction, and war without governance. The Vy'keen also believe that death is inevitable but the Sentinels are preventing this from happening by trying to preserve everything. They believe the all-powerful Atlas rules over all with a limitless supply of its war machines (sentinels). But it's assumed the traveler can change that.

The Traveller will meet several Vy'keen that still support Nal and not Hirk and can chose to protect or report some of them. One particular Vy'keen on his quest through the galaxy will join his team. Here he will uncover the Testament of Nal and his view of the events that took place. How he could create this testament after his 'death' is revealed elsewhere.

"Know that I heard the word of the Atlas where Hirk had heard nothing. In their rage, in their impotent jealousy, Hirk struck me from the mountain and I saw the truth of what the Monolith had said. That my end would be an awakening. That in this dream, nothing should perish... Or so it would be until the coming of the last Traveller. So it would be until the destruction of realities. Know this, the final testament of Nal..."

On the many corrupted worlds that show signs of decay for the great simulation, the Traveller can find Boundary Failures which offer reports of past events by Telamon, often corrupted and out of context. Telamon is a security program the Atlas created to check on itself.
One of these reports tells about Hirk the Great and Nal. It is revealed that the Atlas has given vision to both Vy'keen and they only accused each other of not having heard anything. Nal accepted his fate and that the galaxy and entire universe would one day end by the hand of the Last Traveller, the player. Hirk however doubted the vision and questioned the existence of the sentinels regarding that purpose. After its demise, the 'entity' of Nal was saved in a new form, but showed signs of self-doubt after the Atlas remained silent. This led to him going down the path of self-mythicization. Telamon remarks in its analysis that the apathy of the Atlas is a 'troubling factor', hinting at the decay eating at the Atlas.

The player can gain reputation with successful interactions with the Vy'keen, increasing the morale of distressed Vy'keen, accepting a Priest's ancestral chants blessing, and reporting some Vy'keen military-related crimes.

Once a player attains the highest level of reputation, Vy'Keen traders will be open to assisting with fuel (Carbon), restoring health, and shield recharging. In some notable cases, the player may even be asked to make important decisions on their behalf. (in which all options are good options)

Reputation ranks with the Vy'keen include, from low to high: