From No Man's Sky Wiki
(Redirected from Waypoints)
Jump to: navigation, search
The subject of this article is from the NEXT update.
The information from this article is up-to-date as of 28 October, 2018.

Points of Interest are explorable items in No Man's Sky.

Throughout star systems there are various Points of Interest, ranging from outposts and buildings, ancient structures, to natural resources. They are indicated on the compass (visible while an Analysis Visor is installed) with circular, hexagonal, and octagonal markers, several of which possess icons unique to each Point of Interest, albeit a few are shared between similar Points, such as Manufacturing Facilities and Operations Centres.

See also: Category:Point of Interest for a list of points of interest.
See also: Access Codes for solutions with Interactions.

Various ancient structures dot the landscapes of planets throughout the universe, telling the history of the inhabitants' ancestors or revealing insight into their culture. Scans for artifacts with a Signal Booster can locate most of these structures.

The plaques and ruins one may encounter as they explore different planets teach one of the history of the alien race that occupies the star system. Buried ruins often hold Large Artifact Crates which can be opened using Ancient Keys, found in nearby Artifact Fragments.

The monoliths one may encounter as they explore different planets offer trials based on the values held by the dominant lifeform. A wide variety of rewards can be obtained from passing these trials.

The portals one may encounter allow one to visit other planets in the far reaches of the galaxy they inhabit, albeit cut off from one's ship, unless they should choose to settle upon the world. Each planet has a single portal which can only be located by using specific curiosities at Monoliths.

Found only on Exotic planets, Boundary Failures are large, enigmatic structures which grant lore from the perspective of the Atlas's security protocol.

Certain Points of Interest are of great interest to the Sentinels. These structures, which can be located by scanning secure frequencies with a Signal Booster, require the player to attract Sentinel aggression in order to claim their rewards.

Manufacturing Facilities are factories operated by the star system inhabitants, locked down, and lightly guarded by Sentinel units. Their doors must be forced open with dedicated weaponry (e.g. Boltcaster) to access their terminals, which allow the player to obtain blueprints for advanced products (such as Hot Ice and Cryo-Pumps).

Operations Centres, referred to as Planetary Harvesters by some missions, are specialised facilities operated by the star system inhabitants, locked down, and heavily guarded by Sentinel units. Their doors must be forced open with dedicated weaponry to access their terminals, which allow the player to obtain Upgrade Modules or blueprints for advanced products (such as temporary frigate upgrades).

Depots are small structures packed with resources that one may smash up, and will need to smash up, for certain technology blueprints.

Various inhabited, and sometimes curiously abandoned, buildings can be found dotting the landscapes of planets throughout the universe. Scans for habitable outposts with a Signal Booster will locate most of these structures.

Habitable Bases, consisting of standalone Base Computers on flat land, are the initial starting points of player-built structures. They may be claimed by a player, and then enhanced using the many base-building options.

Shelters are uninhabited Camps which contain pairs of rectangular buildings. Damaged Machinery always appears within a shelter, and shelters often appear next to other habitable structures.

Observatories, which can be located by scans of distress frequencies by a Signal Booster, are facilities said to direct their gaze to the heavens, oft abandoned, and have received a signal from afar. Upon solving a simple puzzle, one is rewarded with coordinates to the signal source, but rather than being located on another world or in another star system, it is typically to a ruin somewhere on the surface of the planet one is on. Perhaps a cruel, ancestral joke ages in the making?

Trading Posts are among the larger structures one can locate, sometimes capable of being found by following the trade lines to them prior to acquiring an Economy Scanner for one's ship (after one acquires an Economy Scanner, they can be more easily found with a dedicated scan while in flight).

Capable of holding up to seven starships on their landing pads, they are usually inhabited by several lifeforms, and their Galactic Trade Terminals, often the targets of Mission Board delivery missions, offer superior prices for market commodities compared to terminals located on space stations.

Transmission Towers are facilities used to receive and transmit messages to starships and freighters. However as one encounters them they are typically abandoned by their operator, for reasons unclear, and have received a distress signal requiring one to solve a simple puzzle to recover its coordinates.

These coordinates typically then lead one to either a Crashed Ship or a Crashed Freighter.

Certain structures on planets are heavily damaged for one reason or another. Scanning distress frequencies using a Signal Booster will usually reveal their locations.

Crashed Ships, marked by Distress Beacons, are wrecked starships which can be claimed and repaired by the player. The Distress Beacons themselves offer rewards of their own.

The player obtains their first ship, the Radiant Pillar BC1, from this kind of Point of Interest.

Crashed Freighters, marked by Distress Beacons, are wrecked freighters with six cargo pods (similar in design to Storage Containers). These pods must be excavated and repaired to obtain their valuable contents.

Abandoned Buildings are infested by alien organisms. Inside, their terminals, jammed by Residual Goop, grant Nanite Clusters and hold the logs of the buildings' previous inhabitants; outside, Whispering Eggs, housing Larval Cores, are jealously guarded by Biological Horrors lurking underground.

These Points of Interest are key to visit during both The Atlas Path and the Artemis Path storylines.

The Space Anomaly is a strange space station that occasionally appears alongside a star system's standard space station as one jumps from star system to star system. It is host to the unusual Korvax Priest Entity Nada, and their Gek friend Specialist Polo.

A Holo-Terminus is a tall structure used throughout the Artemis Path to contact story critical characters during missions to progress.

In addition to minerals, flora and fauna, planets contain unusual formations which often yield unique resources. These natural resources can usually be located and marked with an Analysis Visor.

Resource Deposits are natural formations of concentrated resources, such as Copper, Pure Ferrite, Dioxite and so on. These may be mined to acquire large amounts of resources, and are also where one places Autonomous Mining Units [AMUs], so as to gather from them without having to do so manually. However, remember to mark their location with a deployable beacon, as AMUs do not have a marker on one's compass.

Certain valuable crops can be found growing in clusters on planets with specific Biomes. The following crops can grow in the wild in this manner:

The following resources are indicated by the Roman numeral I:

The following resources are indicated by the Roman numeral II:

The following resources are indicated by the Roman numeral III:

The following resources, which occur at a similar frequency to true natural resources, are common finds on the surfaces of planets: 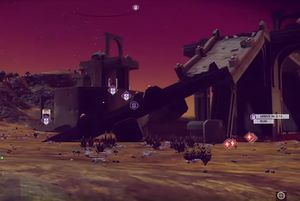 Waypoints, which accompany most other Points of Interest, allow the player to make manual saves and claim discovery of regions of the current planet.

Knowledge Stones teach the player a word of the dominant lifeform's language when activated. Several of these stones can be found on the sites of Plaques and Monoliths.

Beacons are infrequent tall, thin structures enable one to scan for nearby Advanced Lifeforms, such as Gek, Korvax, or Vy'keen, inhabiting a Minor Settlement.

Drop Pods are small structures that hold exosuit inventory space upgrades, allowing one to improve item or technology capacity for free once they have been repaired. They also provide shelter from harsh weather should one step within their small space.

While rare outside of colonial outposts and trading posts, one can come across stray Galactic Trade Terminals to use to sell excess inventory one might have gathered during their explorations, or to purchase items one may need.

Inhabited star systems are host to a Space station where one may dock and disembark to trade, purchase blueprints, and/or take on missions. Uncharted systems do not have space stations. Abandoned systems do have a station, however it will be devoid of NPCs, and therefore also absent blueprint traders, star ships and missions. They do still have a working Galactic Trade Terminal and teleporter.

Black Holes, which can be easily distinguished from other space Points of Interest but are not marked on the player's compass, are rare objects allowing the player to make significant progress toward the galactic centre.

However, in some star systems, these freighters will be assailed by pirates, and one may choose to rescue them or not. If one chooses to rescue them, they may then dock in them and purchase the freighters at a significantly discounted price (or for free if the player does not yet own a freighter).