The Weapons Terminal is a terminal.

Terminals of various types can be crafted, each with their own special purposes. The Weapons Terminal is used for weaponry and explosives. It is used by a hired NPC known as an Armourer. These NPCs can be recruited in space stations within Vy'keen controlled systems.

The blueprints for the following items can be acquired at a Weapons Terminal based on specific quests from the Armourer. 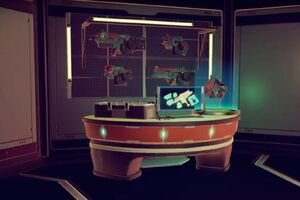 A research station tailored to the needs of Armourers, and equipped for the development of munitions and explosives as well as selected civilian tech.

Weapons Terminal can be built using a blueprint and the following ingredients:

Weapons Terminal can be dismantled after construction, returning the following ingredients: