Yaga's Veil is a star system in No Man's Sky.

Yaga's Veil is a star system in the No Man's Sky universe.

This system is part of the Empire of Pirates and Independent Cartels (EPIC).

Also known as Privateer Base: Bird. The facility was built for GenBra's greater Galactic Security Research. From Security Memo 16 16 this was ground zero. However, after a freak research explosion the lower levels collapsed. 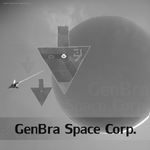