Yukihamur is a star system. 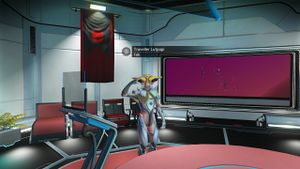 Yukihamur is a prosperous scientific star system on the outer rim of the Delta Quadrant in the Euclid galaxy.

During the Outer Rim Expedition the Traveller's Guild established contact to Traveller Lutpapi who is the beloved supervisor of the system. The system marks the halfway point to the Outer Rim and has become a successful hub of knowledge. Its intensive knowledge and open attitude towards all races has given the system the status of a local capital system. Despite its own prosperity, Traveller Lutpapi gladly joined the Traveller's Guild to further their ideal of coexistence and to invite new explorers into the region. The system is well defended by foreign and personal security alike. Even the sentinels support it. Its security is HIGH!

Aboard the space station the guild is happy to share its food and biofuel from the greenhouse facilities and resources from their supply depot.