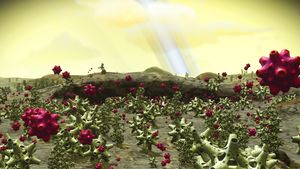 ZED-02 I is a medium planet in the star system ZED-02 in the Cokess Instability region of the Euclid galaxy.

Prior to the Visions update ZED-02 I was a Terraforming Catastrophe world.

During the NEXT release, ZED-02 I was a lifeless planet with the following characteristics: