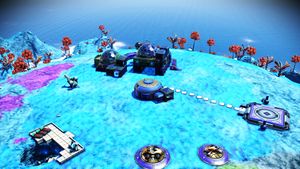 A player created base

Base building allows a player to build a personal residence.

Base building allows the player to build multiple bases, which can be used for farming, storage and recharging Hazard Protection or Shield. There is no limit to how many bases the player can have. Racetracks may also be created and shared at a player base. Base building is available to all four Game modes currently offered in No Man's Sky.

To create a base, simply place a Base Computer (found under "Portable Technology") anywhere and start building.

See Construction for a detailed description of construction information.

Editing a base can include removing a component or changing the colour scheme. To do either of these things, open the Build Menu, and hold down the left control key. This will bring up the following two options:

If a player chooses the "Delete Base" option in the Base Computer, all components in the base building area will be instantly erased and added to the Base Salvage Capsule. Once a player can build the capsule, a percentage of the materials from their deleted bases can be recovered.

See the Player Base Catalogue for a list of shared bases. They can be visited using the respective coordinates on the Pilgrim Star Path website.

There are a finite number of components that can be initially used to construct a base.

It is possible to increase the diversity of components in two ways:

A base provides a home location for a player's NPCs Employees. These can be recruited from Space Stations to fill their respective terminals that a player can install in their base. They then send the player to perform certain tasks to unlock new blueprints, such as Exocraft bays, Haz-Mat Gauntlet and the Advanced Mining Laser. The five types are Overseer, Scientist, Armourer, Farmer, and Technician. Each type will require a specialized terminal to be built before they can be hired. Doors count base NPCs as entities so if a NPC is close to a normal door, normal doors will stay perpetually open unless the NPC is moved further away from the door.

In the event that a player wants to move bases, all they have to do is construct the respective terminals inside of their new base. Hold the action key (E for default on PC) and they'll appear. This can be done without an issue and is cost free. This means a player could have terminals at all the bases they build, and simply "call" the needed employee when they have the needed materials for their mission or to begin generating their mission structures closer to a base on newly discovered planets.

The player should build a Construction Terminal as soon as possible. This will allow the first set of missions to be issued by the Overseer (see Employees above). These missions will lead to all other terminals, the employees associated with those terminals, and hence unlocking additional missions that can add to the number of base components available for base building.

The following blueprints are not available via Construction Research Unit and must be unlocked via the Expanding the Base mission and it's related missions and are in order of obtained:

Additional components can be unlocked at the Construction Research Unit.

As the player buys/earns additional components from various methods, then the Construction Research Unit will unlock to allow purchase of additional related components; i.e walls with glass windows.

Storage Containers can be built for additional storage capacity. Each contains 20 slots with twice the capacity of a starship inventory slot, and up to 10 can be built. This provides the player with 200 additional inventory slots if they choose to build all the containers. The blueprint for Storage Containers is given by the Overseer during their mission series. Containers may be recoloured or named in order to keep track of where resources are stored, and also contain an external number from zero to nine. A player may build only one of each Storage Container, but they can be built at any base they own, including aboard their freighter. Resources can be teleported to storage from anywhere but they cannot be teleported back unless the player is actually in the base where the resources are stored.

Storage containers are shared across all bases, making resources retrievable at any location, as long as the container is built in the local base or on the players' Freighter.

Creating a base allows the player to build a Base Teleport Module, which can instantly transport the player to their other bases. It can also teleport to previous locations that have been activated, like Space Stations or other players' bases.

If you get trapped in someone's base, go into build mode (Z), bring up the wiring/color/delete menu, and pick Report Base to hide it from your game.

Bases should be built in a strategic location if possible to facilitate farming and completing missions: 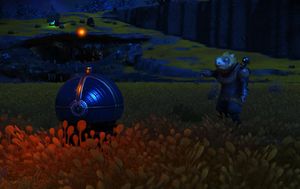 An inactive Base Computer ready to claim.

If an older save is updated to the NEXT version of No Man's Sky (version 1.5+), the player will spawn without their base. Follow these steps to get a previous base back:
1: Select the base building mission in Log. If the mission isn't selected, the base cannot be retrieved
2: Fly down to a planet's surface and use the Scanner. It will locate a Base Computer. Fly to the location.
3: Activate the Base Computer and choose the option to retrieve the previous base.
(note that these steps only work if the player is using the experimental patch as of 1.52. If they do not have the patch, nothing will spawn, so not allowing a player to retrieve their Pre-NEXT base)