From No Man's Sky Wiki
Jump to: navigation, search
The subject of this article is from the Synthesis update.
The information from this article is is up-to-date as of 18 February, 2020.
This article was catalogued by the Galactic Hub. 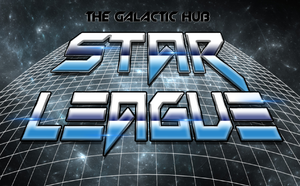 The Galactic Hub Star League is a sports league.

"Simulation Sports" is the umbrella category for any form of live-multiplayer or time-trial-based competitive event in No Man's Sky, such as mutually-agreed-upon player-versus-player (PVP) battles, exocraft racing, on-foot racing, starship battles, and many other possible events. Star League events are hosted in Normal mode on all platforms.

The Galactic Hub Star League is an External Department of the United Federation of Travelers - essentially sponsored by the Federation. (Related Federation Decision)

Any player may register for the Star League on the Star League Roster. Players may compete without being registered on the roster, but will not be directly notified when events are announced.

The Star League Athlete Scoreboard tracks the progress of all players who have participated in official Star League events. All United Federation of Travelers-allied or Hubble-based civilizations may reserve their own section (team) for athletes.

The Star League is separated into multiple divisions, each with a focus on a specific sport or category of sports (see sections below for more details).

Rules depend primarily on the game mode in question. For example, in the Cadmium Division's multitool PVP battles, there are a variety of rule sets to choose from. There are only two related rules which apply to all game modes:

Inability to follow these rules can lead to disqualification, judged on a case-by-case basis. These video replays are also used to promote the Star League, and (as each lobby is limited to 4 players) are the only way for spectators to view the events.

Multitool Battles are hosted at arena bases designed for PVP. These arenas may be found in Galactic Hub space or in the space of other Federation civilizations. The primary objective of a Multitool Battle is to kill your opponent without dying. Before participating in a multitool battle, you should always create a Manual Save so you can avoid dropping any items or otherwise receiving permanent damage.

Any rules may be overruled by battle modifiers (see list below).

Battle modifiers allow for further variety in competitions. Any of the modifiers below may be applied to any of the battle formats above.

The following player bases have been specifically designed for player-versus-player combat, and approved for use in the Star League by their architects. All bases are in Normal Mode unless otherwise stated.

Multitool Shooting Galleries are the secondary focus of the Cadmium Division. All shooting galleries adhere by the same two basic rules:

Add the weapon(s) used to achieve this score in parentheses next to your score.

Scores must include a video of the interloper achieving that score

The Emeril Division encompasses all sports focused on exocraft. This includes exocraft races, exocraft combat, exocraft death races, and others.

Starship racetracks may be a series of player-placed checkpoints via Beacons, or simple Point-A-to-Point-B drag races.

In a drag race, "Point A" is vaguely defined (such as "somewhere on Planet X" or "deep in space"). Pilots then align themselves with other racers. "Point B" is strictly defined (such as "as soon as you exit your ship on the space station"). Due to this, drag races vary slightly in length, and are not suitable for Leaderboards.

In a checkpoint race, the starting point and the finish point are both strictly defined. Pilots must then fly reasonably close to a series of checkpoints (Beacons) placed by other players.

Any drag race or checkpoint race can also be used as a death race. For a death race, weapons won't be allowed until after your ship passes through a specific checkpoint, detailed under each racetrack below. Use of weapons before that checkpoint will disqualify the attacking pilot.

Dogfights are combat between ships with no focus on races. While this may take place in a designated area (for example, "stay within the atmosphere, stay within these caves, stay within this fleet of freighters & frigates"), combatants will only be disqualified after significantly straying from these guidelines.

Exocraft races are the sole sport falling under the Emeril Division. Races are judged by their length - short (2 minutes or less), medium (2-5 minutes), long (5-30 minutes), and extreme (30+ minutes).

The Tritium Division encompasses sports which don't fit into the other divisions, such as on-foot triathlons pachinko, and Vyskee-Ball competitions.