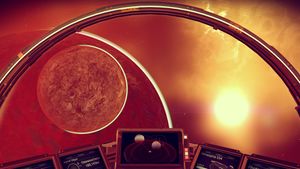 A planet and its moon seen from space (Foundation)

A planet is an astronomical body that moves around a star.

A planet is an astronomical body moving in an elliptical orbit around a star. Players will start on a random planet in a star system near the edge of the Euclid galaxy. When players land on another planet, the planet's basic information, e.g. weather conditions, flora & fauna frequency, will be revealed to the player.

However, players may also scan a planet before landing, receiving approximate information regarding its biome through an adjective, e.g. Acidic/Tropical, and a specific listing of some valuable resources available on the planet.

Based on the associated biome, some planets will contain special features that other planets will not possess. For example, the Exotic biome on a planet in the Zuunurt system. (MOGO:0EFD:007C:07AF:019F) displays large hexagons on its surface.

Since NEXT the terrain and planet type is also visible from space and a mostly accurate projection of what will be encountered post landing.

The universe of No Man's Sky is populated by more than 18 quintillion procedurally-generated planets (18,446,744,073,709,551,616 or 2^64 to be exact) of many sizes, colors, and biomes. Each planet orbits a star and rotates around its own axis, creating a cycle of day and night. The duration of a day, or Sol in No Man's Sky universe is about 15 minutes real-time. Although no Binary Systems have been confirmed, Sean Murray said that binary systems are probably present in the game.

Some planets are harmless, without worry or danger, but some can be very dangerous to the extent that the planet cannot be explored because of the danger. Initial names of the planets are procedurally generated and can be hard to pronounce, which is not unusual in a sci-fi game. The first player to discover the planet gets one chance to choose to rename it before uploading the information. Planet naming will go through a standard profanity filter.

Planets should be added to the Planets category page as they are discovered and logged.

Planets (except for the Dead type) will have Points of Interest (i.e. Waypoints) for the player to discover. 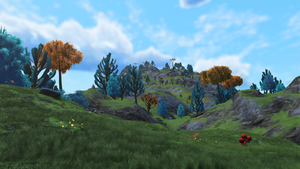 The rarity is one of the following terms for both the flora and the fauna. The sequence is taken from the game file.

The type of star a planet orbits is important for some biomes to appear. The main example are exotic planets in atypical stars.

A moon (and sometimes more than one) can be found in orbit around some large planets. A planet can only have two moons, which limits a system's maximum moons to 4 as only 6 stellar objects are generated.

Some planets have rings surrounding them, which are made up of asteroids and crystals. However mining in a ring is difficult because as soon as one enters a ring it becomes very hard to see due to the fine particles. Sometimes a planet with a ring may also have a moon, this may cause the ring to clip inside said moon.

All planets bearing water appear "oceanic" from space, meaning several parts of their surface show ocean terrain types and a large percentage of their surface will have pockets of water inside. If one digs down in a valley or plain a layer of underground water can be found. All moons however are pangean in nature. The prevalence of water does not prefer any biome type, but excludes dead and seemingly exotic worlds.

(When creating a new page for a planet, please use the Planet option from the pre-built templates.)

The names are procedurally generated using one of the following styles and in certain cases the Adornment term is used.

The sequence is taken from the game file.

The list is based on the planets documented by their original names on the wiki:

It is physically impossible for water to be liquid below -73,15 °C; depending on the pressure it is either solid or gas. Some planets have oceans at this temperature. So, we can assume that not all planets' liquids are made up of water. It is easiest to do this if you forget that the suit voice always refers to liquids as water.